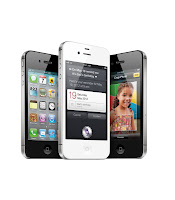 After looking at the specifications of the iPhone 4S I can only conclude that this is quite a major upgrade. Lets take a look at the features in turn.

There is a much improved CPU. Instead of the old A4 the iPhone 4S uses the A5 which is used in the iPad. So essentially it is the speed of the iPad in the iPhone. This is a substantial increase in power for the device and will do much to eliminate any remaining sluggishness that users experience.

There is a new graphics processor which provides a number of benefits. One is the ability to play 1080p video. The other is to be able to capture 1080p video with digital steady cam technology using the gyroscope. And of course any graphichs processing of images and video will be much faster as a result.

The RAM is increased froim 500M to 1G. This doubling of the RAM will mean that things such as web caching and background processing will be much better.

The internal storage increases to 64G. This is something that I much desire. I am always bumping at the 32G limit on my iPhone and having to trim to release that little bit of memory to download another app or podcast.

The internal antenna is redesigned. This was the source of much controversy when the iPhone 4 was first released. I will not go over old ground here suffice to say that there is an inherent issue with any hand held device and high frequency radio signals. However, Apple have with the iPhone 4S taken a huge leap forward in incorporating two internal antennas and is using a technology called space diversity. Simply stated this enables the iPhone transmitters and receivers to select either antenna depending on which is best at any given time. This provides a great improvement in the sensitivity of the phone.

All of this is supported by a new battery with higher capacity so that the charge will last about the same time.

With all of the above in mind I think it is a little ingenuous to suggest that this is no more than a minor upgrade. I will be waiting only because I have over a year on my contract.

Posted by John Hancock at 4:39 AM No comments:

Steve will be remembered as one of the great architects of the personal computer. From the moment that he caught the vision of what the future could look like never forgot the driving force of that vision that he and Woz had in the early days. It was behind the evolution of the first computer that Apple produced and went on to eventually define a whole generation of hand held deices.

I will never forget the day I first saw Steve demonstrate the iPhone. I had been a smart phone user for a number of years and owned several hand held devices and seen first hand many more. I had a vision of what it was that was needed but that day I saw that become a reality. It was truly inspiring to see the concept in my mind in the hands of Steve. If imitation is the sincerest form of flattery then every popular smart phone manufacturer has sincerely flattered the iPhone. For me there is the before the iPhone and the after. Before the iPhone the smart phone was simply a niche market for business users and geeks. After the iPhone it was a truly consumer device which the sales since have attested to.

If Steve had done nothing more than defined the hand held device for a whole generation then he is to be admired. This is a day to mourn the passing of a great visionary and to celebrate his legacy.

Steve RIP.
Posted by John Hancock at 7:25 PM No comments: