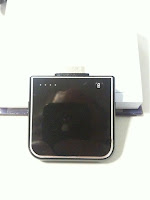 Last week I went looking for a slip case type backup battery to recharge my iPhone in the absence of power. In those rare instances when I have been overusing my iPhone and I am out of the car or away from home or desk. I have one of these devices that plug into the bottom and it has been very useful on several occasions and for about $20 from eBay is excellent value for money. The problem is however that they are awkward to use and do not fit into most iPhone specific USB docks. It does fit in my radio/dock and it can be charged with the USB iPhone cable.

I did a search on Ebay and found one on sale from accdigital for less than $20 including shipping. It took less than a week to arrive from China and for $20 I thought that it was worth taking the risk. If it was rubbish then I was only $20 down compared 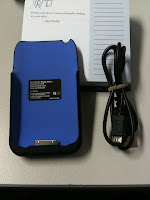 to the brand name products which were around the $70-80 mark plus shipping.

It claims to be 1800mAH which is a little more than the internal battery. This just more than doubles the battery capacity of the phone.

The item arrived in the post about a week after I bought it from eBay in a bubble wrap pack for protection. In the package was the battery pack, a USB cable and instruction written in your typical Chinese broken English. The instructions were however perfectly intelligible, with some re-reading.

I put the pack on charge by plugging the supplied USB cable into the USB power adaptor that comes with the iPhone. I left it for about an hour or two to make sure that it had a full charge. It claims to charge in 30 minutes but I have not had a chance to put this (or its claimed capacity) to the test.

The iPhone slides nicely into place and once the small switch on the bottom is turned on it begins to re-charge the phone. The battery and phone can be charged with the supplied USB cable and it will even sync with iTunes with the USB cable attached without having to remove the battery pack. The pack only weighs 66.5 grams and although it does add to the phone's weight of 137 grams (203.5 grams) does not fee unwieldy in the hand due to the pack's shape.

You could leave the pack connected permanently and use the USB cable to charge and sync or you could charge it separately and use it in emergency situations only. Either way it is a great addition to anybodies accessory pack and great value for money.

Cons: Cannot use a cradle to sync/charge while the battery is in place.

Despite the one drawback I can happily give this five stars. The price more than outweighs the inconvenience of having to remove the phone when docking. The ability to sync and charge both the phone and battery with the USB cable is an excellent feature.

Update:
I had an opportunity to test the capacity of the pack. I was at 10% charge and attached the pack to the phone. I continued using the phone continuously and within an hour the pack was completely flat and the phone was charged up to about 80%. This probably roughly equates to one full charge which is about right. The pack felt quite comfortable all the time I was using the phone with it connected. This confirms my initial score.
Posted by John Hancock at 7:22 PM